You are the Love and Support you Need Throwing a Good Tantrum, Safely

A Good Tantrum is Good for the Soul

When I was a young girl, and was really upset, I would get on my back on the floor (or New York City streets) and throw a tantrum. I imagine I looked somewhat like a crab, arms and legs kicking and writhing in the air. I also made a sound effect when I would cry I still remember distinctly, a “hrump, hrump” with the pouting lip and all.

I wish I could say that I don’t still throw tantrums, but that would be a lie. A new friend said to me recently “Helena, you just seem so calm and serene all the time. I don’t imagine you getting angry”. I told her “Ha. Just ask my husband”. The people who have known me long enough know that although I am often happy, I am also prone to anger. I am an 8 in the Enneagram (The Leader), so I have a pretty fiery personality and when I feel a boundary has been crossed I can bring some pretty intense anger. I can be very protective of other people and myself, and it’s important to me to feel heard and to get things done. But in addition to those potentially admirable qualities, my anger also reveals itself as a frustrated, “I’m not getting my way”, “Fuck You”, Tantrum. 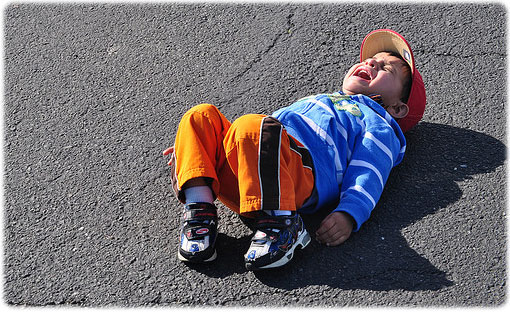 Wikipedia defines a tantrum this way:
A tantrum (or temper tantrum or tirade or hissy fit) is an emotional outburst, usually associated with children or those in emotional distress, that is typically characterized by stubbornness, crying, screaming, yelling, shrieking, defiance, angry ranting, a resistance to attempts at pacification and, in some cases, violence. Physical control may be lost, the person may be unable to remain still, and even if the “goal” of the person is met he or she may not be calmed.

Yep, that sounds about right.

It’s important to note here that even if the “goal” is met, a tantrum-thrower might still not be calmed. That’s because the emotion accessed is much bigger than a particular earthly intention. When I am in the whirlwind of a tantrum, it feeds on itself. And I think a part of me enjoys it. I access a child-like state that is raw and powerful. It is pre-socialization, before I knew what was appropriate in society, before I learned showing anger is “bad”. It is frustration, fighting against what is, and feeling justified in doing so.

We all have parts of ourselves. Some parts, like the tantrum-throwing child in us, can’t come out in public in a safe way. So we might feel ashamed of this part, and put it in “Shadow.” We hope people don’t see it. But they will catch glimpses. No matter how hard you try to hide a part of yourself, it will make an appearance. For instance, recently I’ve hosted some kickball games near my house with adult friends. We choose two team captains who take turns choosing a person for their team, like school days. I can tell in myself and other people that if we’re chosen towards the end there’s an inner tantrum going on. You will hear things like “but I’m in so much better shape than him!” or “what’s the matter with me?!”. I can picture the little kid inside me and my friends whining and kicking the sand of the baseball diamond. In life, you might get passed up for a promotion and need to go in the office bathroom, lock the door, and scream “It’s not fair!”.

So how could throwing a tantrum possibly be good for the soul?

It is important to be in touch with all aspects of ourselves. If we keep our tantrum-thrower in shadow, it could come out in dangerous and unhealthy ways. We might find ourselves letting it rip on a partner and blaming them for everything. And I’m sure we can all cite much worse cases of inner anger and frustration being let loose in terrible ways on other people in our society.

We each need to embrace that child in us who wants to cry out in frustration and beat their fists on the sidewalk. Listen to him or her, and take them seriously. Maybe get him or her to laugh at themselves later. But do this in a safe space, where we will not harm ourselves or other people.

Stay tuned tomorrow for my next post on how to experience your tantrum in a safe way. Meanwhile, notice when your inner child comes out in the that way, either just in your head or with other people.